Demand for truck space in Europe rises above available capacity

Demand for truck space in Europe rises above available capacity for the first time.

The demand for available freight capacity on European roads is growing. In the first quarter of 2018, the number of freight offers on the EU transport market was larger than the number of vehicle offers at a ratio of 54:46. This calculation is the result of the current TimoCom transport barometer market evaluation, the industry indicator for road transport developments within Europe.

In the first quarter of last year, the freight - vehicle ratio was 43:57. Even in 2016, the ratio in the same period was 30:70, with a significant surplus of free vehicle space. 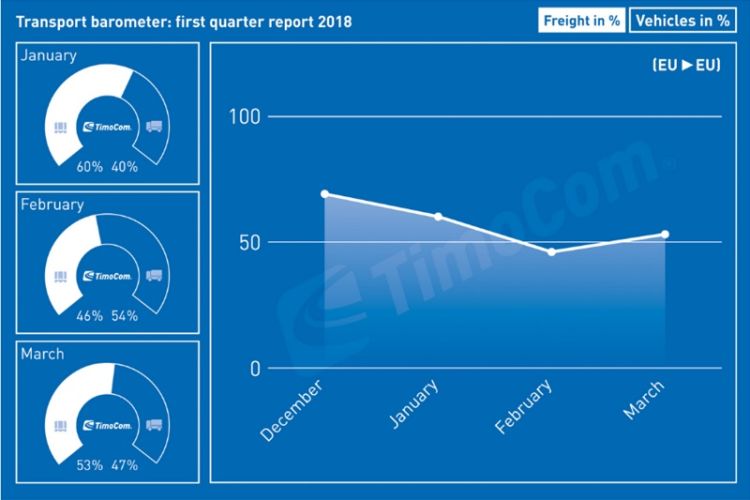 “The market indicators on the transport market have shifted significantly in the last three years,” says TimoCom Company Spokesman Gunnar Gburek. “Just a short while ago, transport companies were decreasing their margins, today they can select from a surplus of transport requests and decide on the most profitable tour.”

This development corresponds to the strong growth of the European market. For example, the Eurostat statistical offices noted an increase in economic performance of 2.5 percent in both the EU and the Eurozone for 2017, the highest in 10 years. German economic development is also maintaining momentum: according to information from the Federal Statistical Office, German exports rose by 8.6 percent in January 2018 as compared to the previous year; imports grew by 6.7 percent.


There is no end in sight to this high demand

“There is no end in sight to this high demand”, says Gburek, taking a shot at predicting further market developments. “In addition to efforts to solve structural issues, all those involved in transport must, more than ever, take care to avoid empty runs and use existing capacity with maximum efficiency. The cooperative approach modeled by the EU project NexTrust is a good example.” The goal of NexTrust is to support cooperation between companies to create more efficient and therefore more environmentally friendly transport.

NexTrust is an EU-funded project that brings together 31 partners to drive collaboration in the logistics industry. Its objective is to increase efficiency and sustainability in European logistics