Due to these statistics which show that road accidents are increasing at an alarming rate, the Mauritian Police Central Division organized multiple events throughout the country to sensitize the population on the way that the Mauritian roads should be used, with the main objective to change the attitude of drivers on the road, normalize responsible driving, and build cultural disapproval of risk taking. 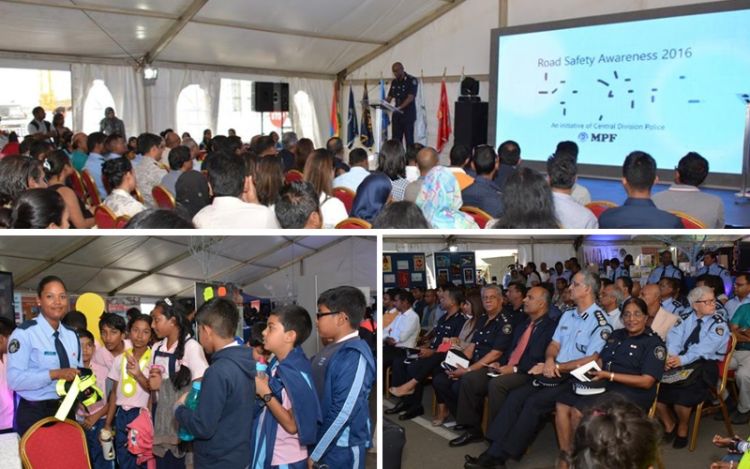 From the 26th of September to the 9th of October, 2016, the Police Central Division organized the week-long Road Safety Awareness campaign. This public awareness project was carried out under the motto “Be Safe” and aimed to educate drivers towards the degree of risk of certain driver behaviors, which should be avoided, and in general, frowned upon by drivers and their passengers.

Frotcom Indian Ocean was one of the companies invited by the organization to participate and help make the case for safer driving habits in the island-nation. During the event, Frotcom Indian Ocean had the opportunity to reinforce its corporate social responsibility commitment by promoting proper driving habits, demonstrating the use of the Driving Behavior Analysis module.

Frotcom presented to the audience how to monitor driver behavior, identify any flaws in the management of the fleet, develop and implement remedial actions, how to plan a journey to avoid unnecessary rush, choose the shortest route, how to monitor the implementation of a planned journey to avoid stress and promote customer satisfaction and promote peace of mind (management / driver / customer), and finally how each vehicle speed limit can be configured in advance depending on the type of vehicles, goods transported and routes that are being taken.

Fawzy Delior, Managing Director of Frotcom Indian Ocean, showed his commitment with this cause, and stated that “around 40% of the vehicles in Mauritius belong to private companies, parastatal and government bodies, and we noticed that there is an abuse in the way vehicles belonging to the mentioned bodies are being driven and treated. Accordingly, we strongly believe that if owners of these fleets do take adequate actions to educate their drivers, monitor their driving behavior and plan the journey adequately, this can decrease the risk of accidents enormously.”

The project, this year alone, is estimated to have sensitized almost 10 thousand students and over 16 thousand road users.