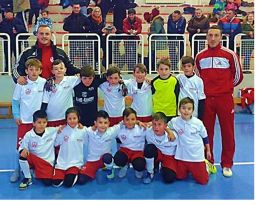 The continuation of a successful relationship started in 2015, Frotcom Macedonia’s Country Manager, Dragan Kostovski gushed words of praise for the young ones: “Our generation 2008/07 children attending the Christmas tournament in Negotino put their hearts and minds to it and it paid off. They won first place and became the champions of the tournament. Nothing can put into words how proud we are of our team.”

He added, “I want to congratulate all the guys for their discipline in the game and team spirit. We wish them all the success in the future with even more desire and effort to climb the ladder, beyond even football... BRAVO guys!”

A special note of praise was awarded to 8 year-old Martin Gjorgjiev who was named Player of the Tournament.

In a few weeks’ time, the team will go even further by participating in the Sandanski (Bulgaria) international youth tournament which will bring together players from across the Balkans.
Post tags: